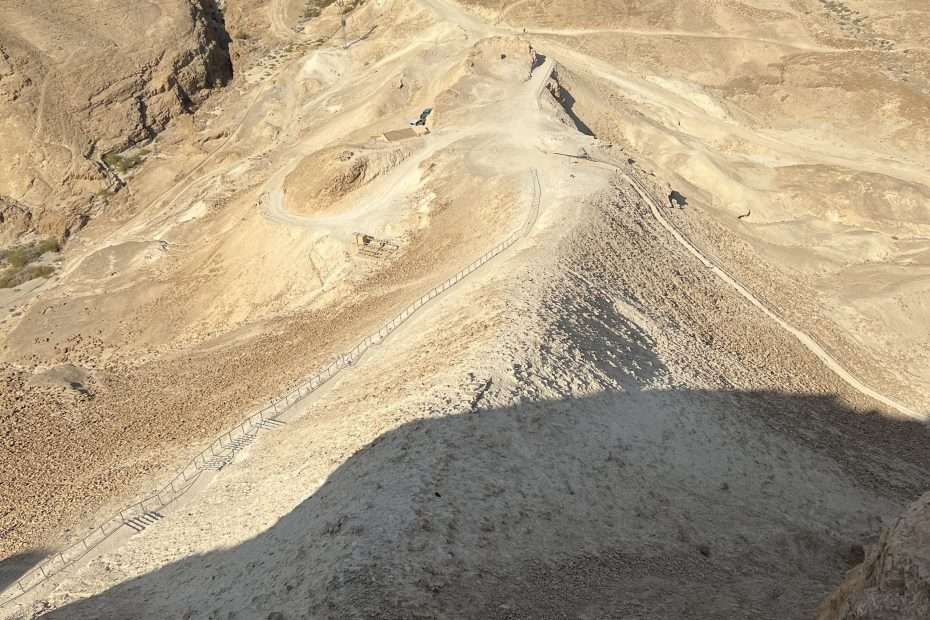 Today I had three conversations with three different people who all started a conversation about how the world hasn’t changed much since … well since it was governed by people. Yesterday, I mentioned that we had other stops along our way to Qumran. One of those was Beit Shean a vast Roman city that was built upon ruin upon ruin upon ruin of one empire over another since the Canaanites. Today we began our day at Masada, Herod’s opulent … and I mean opulent … fortress home built upon a mountain plateau in the middle of the Judean desert. We approached the site driving between the ruins of the Roman army of Flavius Silva that had encamped around the fortress where Jewish zealots had ensconced themselves defying Roman rule. From the top of Masada we could look down upon the enormous earthenware ramp the Romans had built in order haul their battering ram up the slope to break through the wall and subsequently crush the rebellion. (You can watch the film Masada with Peter O’Toole and Peter Strauss for a pretty accurate account of the story.)

All this to say no matter how grand and no matter where … it seems that someone grander and from somewhere greater will want to take over the land. It’s in our news today and has been since 3,000 BCE. How does anyone doubt that we need a Savior? We cannot seem to stop fighting one another for one thing or another.

We spent this afternoon at the Dead Sea soaking in the healing (and I was told beautifying!) waters, literally soaking in them. we were all surprised that our fingertips did not wrinkle! All we could deduce is that the salt and mineral content (9 times more than the ocean) keeps them from wrinkling. Floating becomes a learned art … do NOT turn over as your derriere floats higher than the rest of you giving you a face plant into the salty depths. NOT fun. So I should return fully healed from all ills and beautiful … we’ll, maybe. It was a fun afternoon.

We are now happily situated at Christ Church Guest House in the Old City of Jerusalem. Tomorrow we conquer the city … well, maybe not conquer if we want to change history.