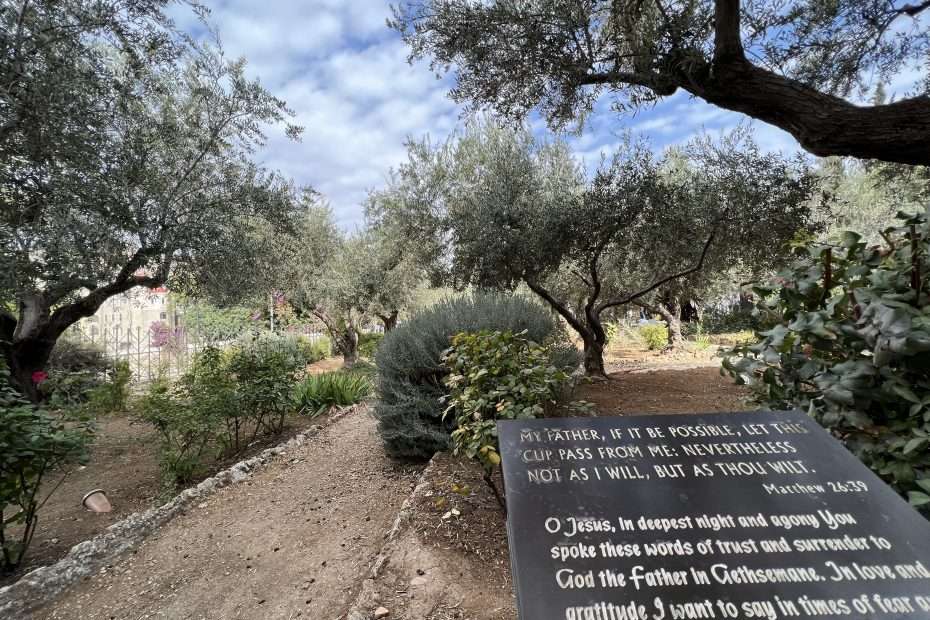 The day was full to overflowing. I just spent over 20 minutes with my roommate trying to remember all that we saw and when we saw it. We are still unclear. It happens when you experience too much to assimilate and digest. So, here are highlights that stood out after my conversation with roommate.

A hill and a stone: The Mount of Olives is a most beautiful place that in Jesus’ day was probably always full of activity. Around this time of year after the first fall rain the olives would be harvested. The first press of olive oil went for use in the Temple, the second press for food preparation and salves and the like, and the third press was for lamp oil. What was left was burned for fuel. The night of Jesus’ arrest he was in an olive grove with his disciples. He was at a critical juncture for the first harvest of his ministry, his purpose and it took him into the press of prayer. We know that His time in prayer, His conversation with His Father en-couraged Him for what lay ahead.

A tomb: We walked the Via Dolorosa following Jesus through The night of His suffering and death. Many of the stops along the way are challenged by other sites that claim they are the place of … the flagellation, the first fall, the women wail, etc. Regardless of standing on the exact site the path following the way of our Lord to His cross is overwhelming and impactful. From Station 5 it begins an upward climb to the Church of the Holy Sepulcher (some say it begins at Station 2 but my legs could feel it at 5). After entering the Church of the Holy Sepulcher we wound our way around behind the edicule to a small burned out chapel. A fire nearly destroyed everything in this chapel decades ago. It has not been renovated because of infighting within the denominations that make decisions regarding the church. So it sits vacant … but! … if you walk through an archway in the side wall you discover two first century tombs hewn into the stone. The tomb where Jesus was laid was probably grander given that it was for Joseph of Arimathea, who had it set within a garden. Even so, seeing these tombs … especially the darkness and bleakness … brought the reality of Jesus’ residence in death all the more weighty. He carried all our sinfulness and waywardness into that tomb and defeated it once and for all time.

A song: After visiting the Garden Tomb, another contested site for where Jesus was buried, we found ourselves in St. Anne’s by the ruins of the Pool of Bethesda. (The Chosen series has a moving episode of the healing of the paralytic at this site.) The acoustics in this church are phenomenal as we discovered when one of our group began to sing, Alleluia! Alleluia! Give thanks to the risen Lord! The music echoed perfectly raising praise to our Lord. Our singing brought other pilgrims inside and before we knew it many were sitting in the pews quietly listening offering their own praise. A most lovely way to end the day. Glory.