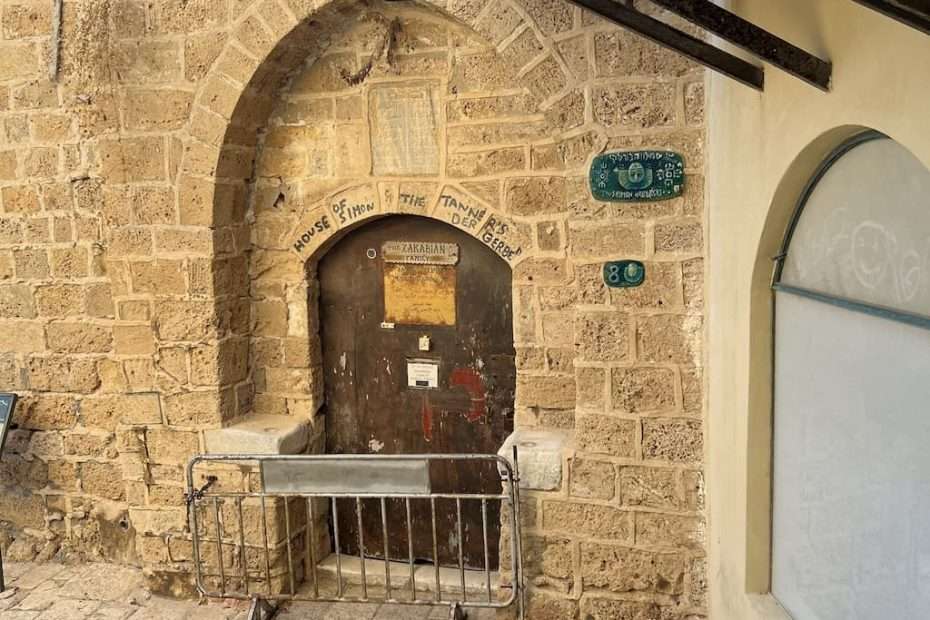 We travelled straight from the Ben Gurion Airport to Jaffa, known in ancient times as Joppa. It was here that Jonah fled the Lord’s command to take His word of repentance to the Ninevites and instead, boarded a ship going the opposite direction (some think finally being spit out by the ”whale” near the Rock of Gibraltar!). Jaffa or Joppa is one of a few port cities in this region and has been the critical landing place for numerous invasions, from the Assyrians to Napoleon (who didn’t get very far. The people held him off and he retreated from his plans to annex the Holy Lands to France.)

Joppa is also the place where the vision came to Peter while he was praying on the roof of Simon the Tanner’s home. He saw a large sheet or blanket come down from heaven filled with all sorts of animals and the Lord invited him to come and eat. Peter replied in horror that he had never eaten anything but kosher! How could the Lord ask this of him? The Lord responded that all was kosher, all was acceptable.

Immediately, a knock came at the door and a messenger from Caesarea (about 15 miles from Joppa) requested that Peter come to the home of a centurion, named Cornelius a man who feared God and generously gave alms … and yet he was a gentile, a Roman gentile, an enemy of Israel! Cornelius had heard about Peter and wanted to hear his message. The next day Peter and some of the brothers from Joppa went and spoke to Cornelius’ household. That day his household was baptized in the Name of the Lord Jesus Christ … probably in the Mediterranean Sea at Caesarea … and filled with the Holy Spirit! Peter responded to this event, ”Truly I understand that God shows no partiality, but in every nation anyone who fears him and does what is right is acceptable to him.” (Acts 10:34)

Imagine how this challenged Peter’s understanding of the faith. The gospel of Jesus Christ, His gift of the Holy Spirit was for all nations, all people are acceptable to receive His gift of life. so should we always be ready and willing to go and tell whomever God brings to us … or takes us to … to give His message of life in Jesus Christ.